Magnetohydrodynamic turbulence: The MHD approximation describes the behavior of conducting fluids and the large-scale dynamics of plasmas such as the solar wind and the solar corona. In MHD turbulence the fluctuating magnetic field and velocity fluctuations enter on equal footing, allowing for the excitation of Alfven waves, the development of Alfvenic states, and for self-organization processes such as selective decay. Our group studies turbulence in this approximation, with special interest in heating and dissipation processes, multiscale nonlinear interactions, intermittency, compressible turbulence, wave excitation and wave-flow interactions, magnetic reconnection, and applications for space physics.

Two fluid models: The study of physical processes in space physics and astrophysics at scales smaller than the ion skin depth requires two fluid models, in which electrons and protons are considered separately but are still described as fluids. These models include extensions of MHD such as Hall-MHD, or two fluid models that take into account other kinetic effects. Our group has studied turbulence in many of these approximations, considering magnetic reconnection, turbulent dissipation and heating, intermittency, exact scaling laws, and scale by scale interactions. 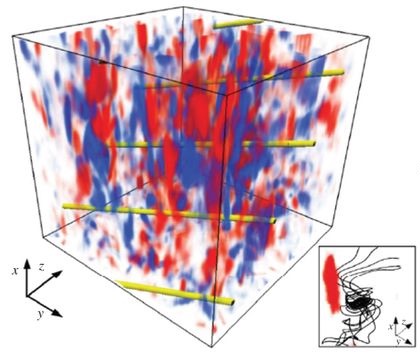 Particle acceleration: The production of energetic particles in the Earth-Sun enviroment and in the interstellar medium brings the open question of what are the mechanisms behind the generation of the observed non-thermal charged particle population. In all these systems the flows are turbulent, as the turbulent plasma state is observed in almost all astrophysical and space physics systems. Acceleration of charged particles by turbulence in the solar corona is also one of the candidates to explain coronal heating, as well as the origin of solar wind energetic particles observed at in-situ mesurements and at ground-based observatories. We have conducted numerical simulations on acceleration of test particles by MHD flows, in compressible anisotropic MHD turbulence, as well as in two fluid simulations. 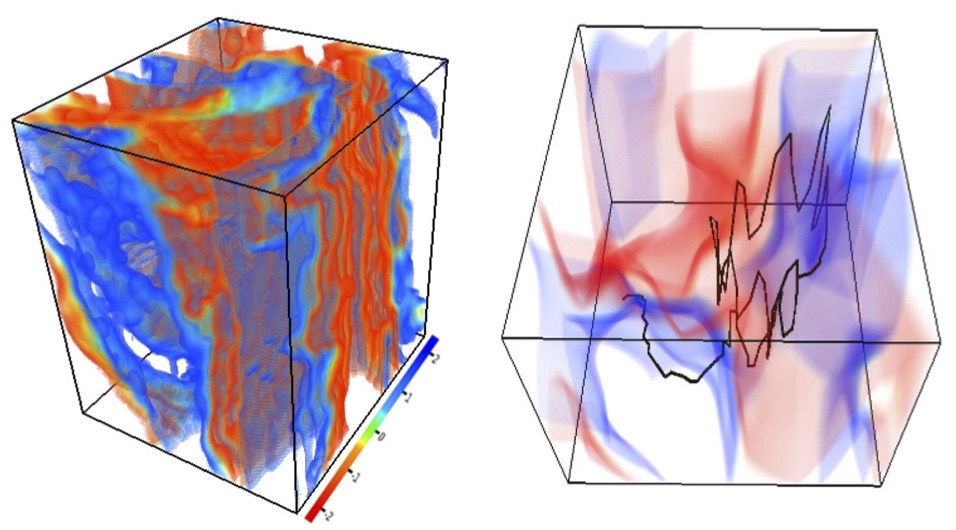 Particle in cell and hybrid simulations: Our group has also been involved in studies of plasma physics using hybrid simulations, and more recently we have started to study magnetic reconnection, particle acceleration, and turbulence using PIC codes. 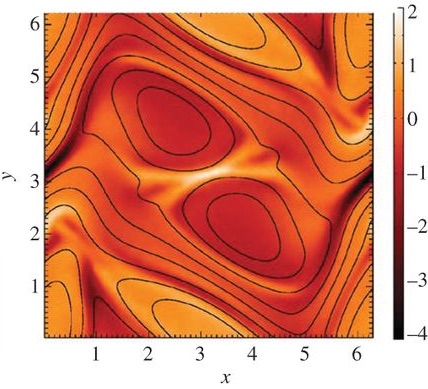 Self organized criticality: In the last decades, a possible connection between intermittent structures in MHD turbulence and SOC has been intensely debated. SOC has been proposed as the underlying physical mechanism responsible for the intermittency of the dissipation field the solar wind and the magnetosphere,  and it has been suggested that dissipative regions can communicate over large distances, by analogy with critical avalanches in sandpile models of SOC, producing conditions for a statistically steady state of nonequilibrium critical behavior. Our group has considered implications of this link in MHD turbulence.

Dynamo action: Magnetic fields in planets and stars are sustained against Ohmic dissipation by dynamo action, the self-induction process by which kinetic energy in the flow is converted into magnetic energy. We have studied small- and large-scale dynamos in two fluid approximations, magnetic field reversals for applications in the geodynamo, long-term memory processes in MHD turbulence and dynamo action, dynamos with low magnetic Prandtl numbers for applications in experiments and planetary cores, and dynamos in spherical vessels, among other problems.